They're trying to get me kidnapped and tortured, but Twitter doesn't care

A few days ago I was reading the report by the Twitter whistleblower 'Mudge' Zatko with shock and disbelief, not knowing that I would have to face the apathetic and dangerously incompetent Twitter moderation machinery soon. A machinery that is so broken that it ignores your appeal for help even when you tell it that your life is in danger.

I don't know if a bot or a human saw my reports, but their responses to each of my reports so far has been basically:

It is hard to explain to Twitter what is really happening to me and how they are becoming a party to endagering my life. How their moderation policies can ruin my life forever. So, I guess I will have to explain it all here. For the record.
And in hopes that someone who can do something might notice this and help me before it's too late.

To understand this, you need to know a bit about Pakistani politics, which I am sure that Twitter -- irresponsibly -- doesn't.

Almost 5 months ago there was a parliamentary coup in Pakistan. A coup orchestrated by Pakistan's dynastic, mafia style, political parties and Pakistan's [REDACTED FOR SAFETY]. At least, that is what I believe. I explain the reasons why I believe it was a coup here. As the coup unfolded, so did protests unprecedented in Pakistan's history. I talk a bit about that here. You can read more about it here. And as the protests started, the inevitable response to the protests by the govt and the Pakistani [REDACTED] also started. The response was violence, abduction of activists, warantless raids, and false cases. Many of them are documented here. The general fascist playbook, basically.

In Pakistan, activists and journalists are routinely picked up (abducted) and tortured by the country's police and secret services. Same happened this time, some of the top journalists and anchors were picked up - some without warrants with fake cases filed post-arrest. Some of these journalists remain under custody till date. These journalists, according to reports, have been stripped and tortured under custody. One activist -- the Chief of Staff of the former Prime Minister, no less -- was picked up last month and allegedly faced horrific torture under custody. He has publicly claimed that his genitals were electrocuted under custody. There have been raids on the houses of many young men and women in their 20s - unknown individuals - just for posting Tweets against the government, they have been scared and forced to apologize on videos that were publicised. Most recently, a pediatric nephrologist, one of the few in the country, was arrested for the 'most serious' crime of publishing an anti-govt Facebook post.

I can go on and on, books can be written about the state of human rights in Pakistan. And they have been.

I have been a journalist in Pakistan for ten years. For most of my career, I have been a web editor at different newspapers, mostly behind the scenes, not widely known outside the industry. I do have some following on Twitter, but Twitter doesn't verify me because of their weird verification rules that don't think there can be journalists without bylines. Two years ago I moved to New York for grad school. So, when this coup unfolded, I found myself out of reach of the fascism of the new Pakistani govt. I love my country, I do not want to see it fall in the hands of fascists, and as a journalist I feel it was my responsibility to raise my voice. That is why I had become a journalist in the first place.

I gave multiple interviews about what was happening in Pakistan. I tweeted relentlessly about it. Some of these threads went viral and were widely shared. Eventually it started happening to me. The current Minister for Planning and Development falsely accused me of inciting violence, probably in the hopes of building a false case and narrative against me, when I had only called for people to question their politicians. These people were showing their frustration because I was out of their reach and could not be abducted for the time being. What came from the Minister was maybe an exaggeration or a veiled threat, but what started happening after was more insidious.

To start off their harassment campaign against me, they made a fake (or parody, in Twitter terms) account about me. Twitter policies allow 'parody' accounts. Even though Twitter does not think I am famous or notable enough to be verified, they still think that I can be 'parodied'. 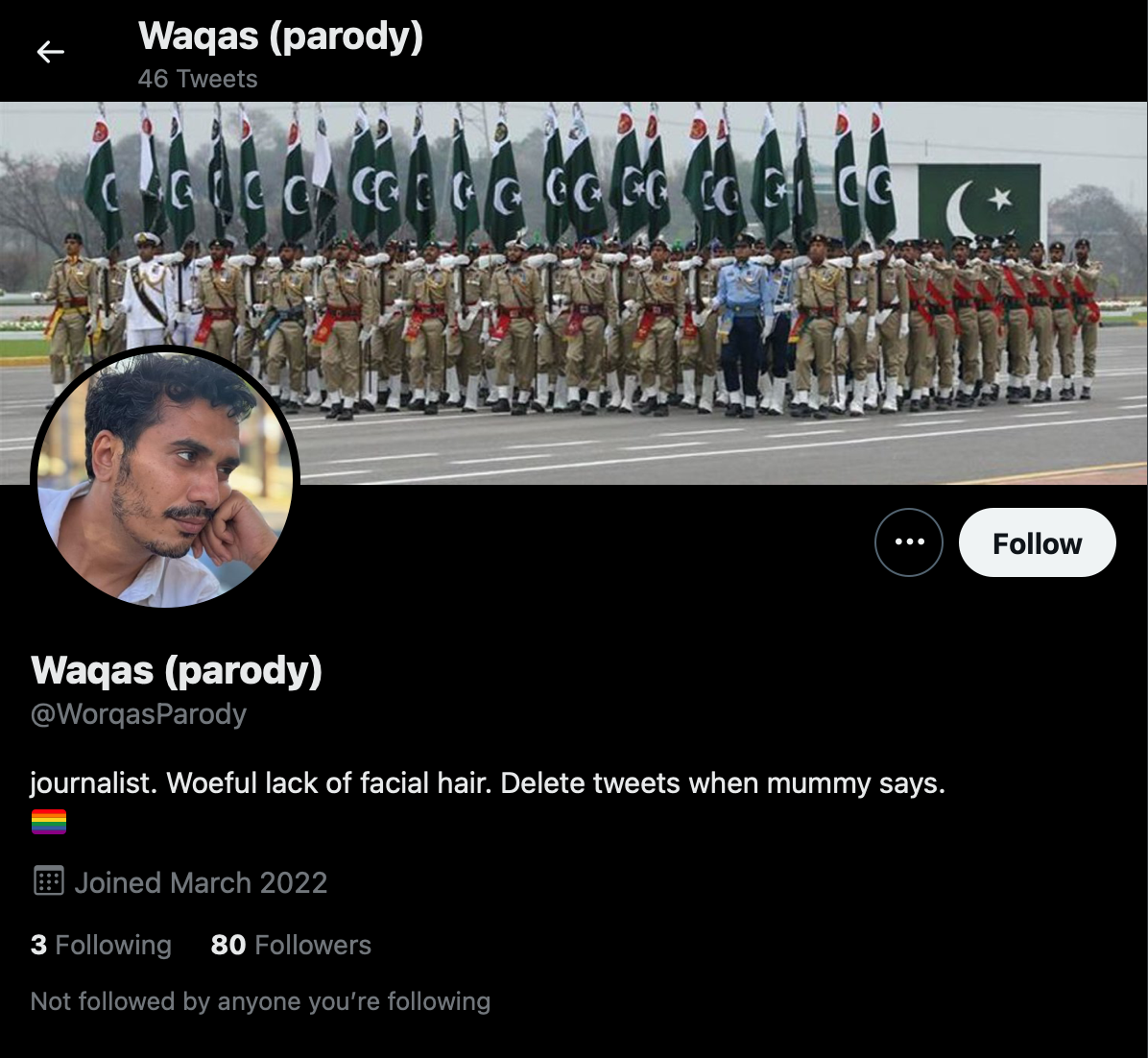 The 'parody' here was, making fun of my appearance, spreading false news about me, generally defaming me and trying to discredit and frustrate me. Twitter policies allow people to do that. I was a target of an organized harassment campaign, but Twitter ignored my reports. I thought 'ah well, thats life' and moved on, continued my work because those are the hazards of doing journalism. Right?

How I became an Israeli Agent

In Pakistan, the political discourse has a lot of antisemitism. Political opponents, journalists, and activists can be accused or be declared of being an 'Indian and Israeli agent' and abducted, tortured... the works. This is the most easy label to pin on someone so that their abduction and torture does not raise a lot of eyebrows in the overall society. Because India and Israel are 'enemies' (Whether I personally agree or disagree with that is irrelevant here).

However, before they had issued a clarification about it, I tweeted about the organized campaign to discredit this organization - knowing the modus oprandi of the govt. As soon as I tried to bust this propaganda, they came after me. A Twitter account by the name of 'Standup Pakistan' was created and one of its first few Tweets was a false claim I had been hired by the Indian organization IHRF. This was not true of course, but with that claim I could be abducted or arrested in Pakistan, they could put sedition charges on me (the max punishment for whish is death btw), and nobody would say a word.

This Tweet from a fresh account was somehow immediately picked up and quote tweeted by a comedian with 200k+ followers and a verified account. I assume he was in on the campaign, because he had been doing a lot of pro-govt tweets recently and attacking govt opponents. From there, another pro govt 'journalist' with 80k+ followers retweeted it. I kept reporting all of this, but Twitter kept rejecting my reports.

The news of my treason spread far and was twisted in the process. One person tweeted, using the screenshot of the original fake post:

This Yuthia [derogatory slur] @worqas, has been appointed as the representative for Pakistan for international human rights company IHRF, which is registered in India and is part of the fake news sites and networks funded by RAW [Indian secret services]. Pakistanis now understand how Pakistan is being destroyed with the help of India and Israel?? 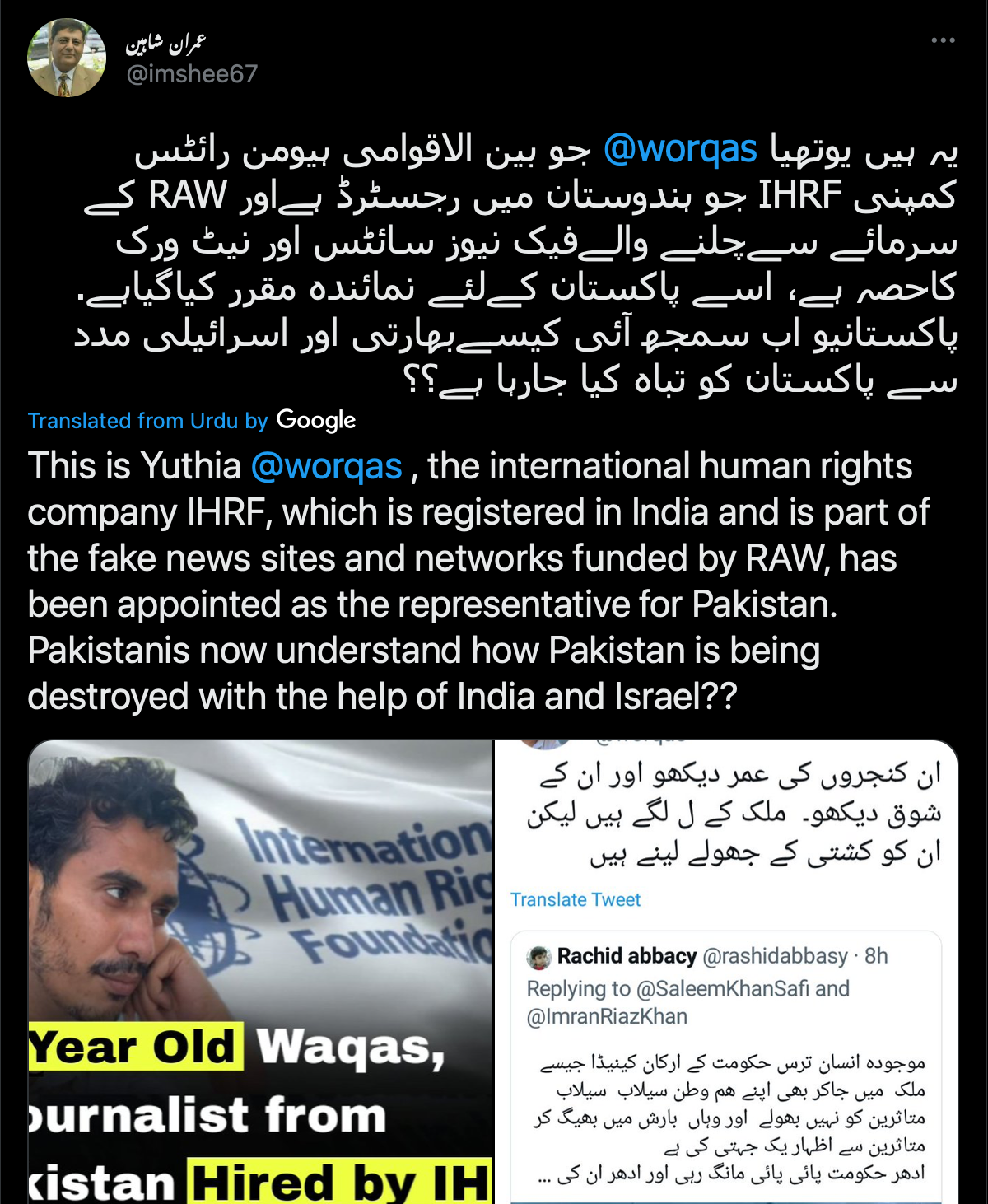 I reported all these Tweets, Twitter took action on none. I got responses that none of them violate Twitter policy. Not my parody account, not the false accusation of 'working for India', not the comedian with a verified account with quarter of a million followers, not this one random guy calling mme an Israeli agent.

It is a coordinated harassment campaign but Twitter claims it is all kosher. I feel that the Pakistani authorities or its supporters are building a case against me for 'treason', they are trying to get me abducted or arrested when I go back home, they are trying to ensure that nobody speaks up for me when i get abuducted, and Twitter as a platform with its dangerously stupid moderation policies is helping them do this.

The situation in Pakistan is so bad that even a US congresswoman Tweeted about it today. Yet Twitter, with its 20+ million users in Pakistan does not know this. Not only are they blissfully unaware of the political situation and dangers to activists and journalists in Pakistan, they are actively helping the perpetrators. Twitter, despite millions of Pakistani users, it seems has no moderation system that understands local dynamics. This incompetence of Twitter is putting my life in danger.

By now, these Tweets have probably been seen by thousands of people, who have already formed opinions about me based on these lies. I do not know what will happen to me now. Twitter doesnt care. They have rejected all my reports.

Despite all this, I continue to do my work. If I stop, I let them win. However, due to this, my work has become much harder, I have become slower. Now I have to counter propaganda against while doing my other work. I feel weighed down. I feel Twitter should have protected me, instead of protecting the henchmen of a facist regime bent upon silencing critics.

If you are a human at Twitter who can put an end to this madness, please reach out to me. My contact details are in the nav menu on the left. If you are a lawyer who could help me, I would love to talk.

Thanks for reading this.